Not just cars. In Naples the moorers are also abusive

Amazon Alexa will be able to imitate any voice

Competition between digital assistants, which have become an essential interface for home automation, is fierce. And to stand out, the various players are constantly innovating. As for Amazon, it could stand out by offering a feature on Alexa allowing the assistant to imitate any voice from very short extracts.

As the TechCrunch site reports, this technology was recently showcased by Amazon at its re:Mars conference in Las Vegas. According to the American media, the scenario presented by the e-commerce giant was that of the voice of a deceased grandmother, which could be imitated by Alexa to read a story to put the grandson to sleep.

“It required inventions where we had to learn how to produce a high quality voice with less than a minute of recording against hours of recording in the studio”notes Rohit Prasad, senior vice president and chief scientist of Alexa. “The way we did this is to define the problem as a speech conversion task and not as a speech generation path. We are unquestionably living in the golden age of AI, where our dreams and science fictions are becoming reality. »

As a reminder, re:Mars is Amazon’s annual event dedicated to artificial intelligence and which focuses on machine learning, automation, robotics and space. Of course, Alexa was not left out during this event.

Below, you have the keynote video from the second day of this event, during which Rohit Prasad briefly presented this feature under development for Alexa, which will allow the assistant to imitate voices from very short extracts. .

At 1:02:38 on the video, Amazon introduces the scenario where a child asks Alexa if her grandmother can read her a story.

Unfortunately, Amazon’s framework did not provide further details on this technology. And we don’t know when this technology could land on Amazon’s Echo speakers. Moreover, certain ethical questions could be raised in relation to this functionality which is still under development.

Amazon Alexa shows off her muscles

In any case, with this demonstration, Amazon recalls that it is also very advanced in terms of artificial intelligence, while competition from Google and Apple in the field of home automation and connected assistants is more and more harsh.

According to recent data published by Strategy Analytics, Amazon is still the global leader in smart speakers, with a market share of 28.2%, corresponding to 9.9 million units shipped in the first quarter of 2022. Google was second place, with a market share of 17.2%, or 6.1 million units shipped. During the quarter, worldwide shipments were down 4.5%. 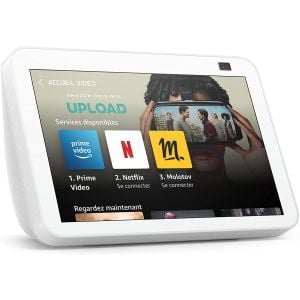 This decline was caused by component shortages, the war in Ukraine, as well as rising COVID-19 case numbers in China. But the most worrying thing is that in the United States, the market would begin to be saturated.

” […] in the US market, smart speaker and smart display penetration rates are approaching a state of market saturation, and the market is shifting from new customer acquisition to add-on or replacement sales that historically have longer sales cycles »says a head of Strategy Analytics.

And precisely, in the event that the market is saturated, Amazon, Google and other players should bet even more on novelties in order to encourage users of their old products to buy new models.

Xiaomi Mi Band 7 review: the price is not everything

Elon Musk goes ahead? Starship will be tested, but the launch license has not been received

France will supply Ukraine with VAB amphibious armored personnel carriers: what is known

At school of technology with Amazon Web Services and WeSchool

Not just cars. In Naples the moorers are also abusive

Johnson on the referendum in Scotland, this is not the time

What Lauterbach is planning in addition to the higher contributions

Essilux: Milleri also president until the end of his mandate

Transportation and related services: Ukrzaliznytsia will increase tariffs by 70%

At two rates at once: how Oschadbank systematically deducts money from a client

“Sue for 10 years”: Irina Bilyk about the organizers of concerts of Russian artists in Ukraine

13 in one fell swoop

Talented children: Kaminskaya’s daughter sings a folk hit. The sons of Monatik read the lyrics of their father (video)

Serie A women starts on August 27, Serie B on September 18

From Wimbledon to the Tour, the shadow of covid also returns to sport

Golf: here is the Italian Challenge Open, there is Manassero

Football: RMC, Psg has communicated to Neymar that he wants to sell him

Xiaomi Mi Band 7 review: the price is not everything

Elon Musk goes ahead? Starship will be tested, but the launch license has not been received

France will supply Ukraine with VAB amphibious armored personnel carriers: what is known

At school of technology with Amazon Web Services and WeSchool