Best Altcoin To Mine That Can Make You Rich

Best New Crypto Coins That Can Make You A Millionaire

Sorare: the incredible story of Cristiano Ronaldo’s NFT sold for $ 400,000

We told you about it a few months ago, Cristiano Ronaldo’s unique card on Sorare continues to break all records. Launched in the game, it joined the traditional world by being the subject of an auction in the famous Bonhams house. And a new record has just been broken. Back to the history of this NFT.

We have already introduced you to Sorare, the French startup that explodes all the counters with its fantasy football game on the Blockchain. Each year, and for each player in the game, 1,111 cards are issued in the form of NFTs. Classified into different levels, the most common are edited 1,000 times, the rare 100 times, the super rare 10 times, and the unique… once.

This unique Cristiano Ronaldo card launched on February 21, 2021 on Sorare, in a pack containing 4 other rare cards. After auctions between the biggest Sorare managers, it’s “VictorNettoyeur”, who won the global auction at a price of 55 ETH for the 5 cards, which on D-day represented a little over 105,000 dollars.

In Sorare, managers can use cards to participate in championships and win prizes (ETH and / or cards). They can also put their cards back on sale to generate profit. The owner made that choice, almost immediately re-listing his unique Cristiano Ronaldo card on the market.

The most expensive card in Sorare history

It was on March 14 that the card found a taker, an investor with the nickname “Camembert” ayou chose to invest 150 ETH on this NFT, with a value of $ 277,000 at this precise moment. Sorare fans have long wondered what the manager was going to do with the card.

Firstly, Camembert chose to use the NFT to participate in the various competitions for several weeks. A good decision, the card having enabled him to earn the equivalent of 4.8 ETH in 5 different championships, by combining the value of cards and ETH won. 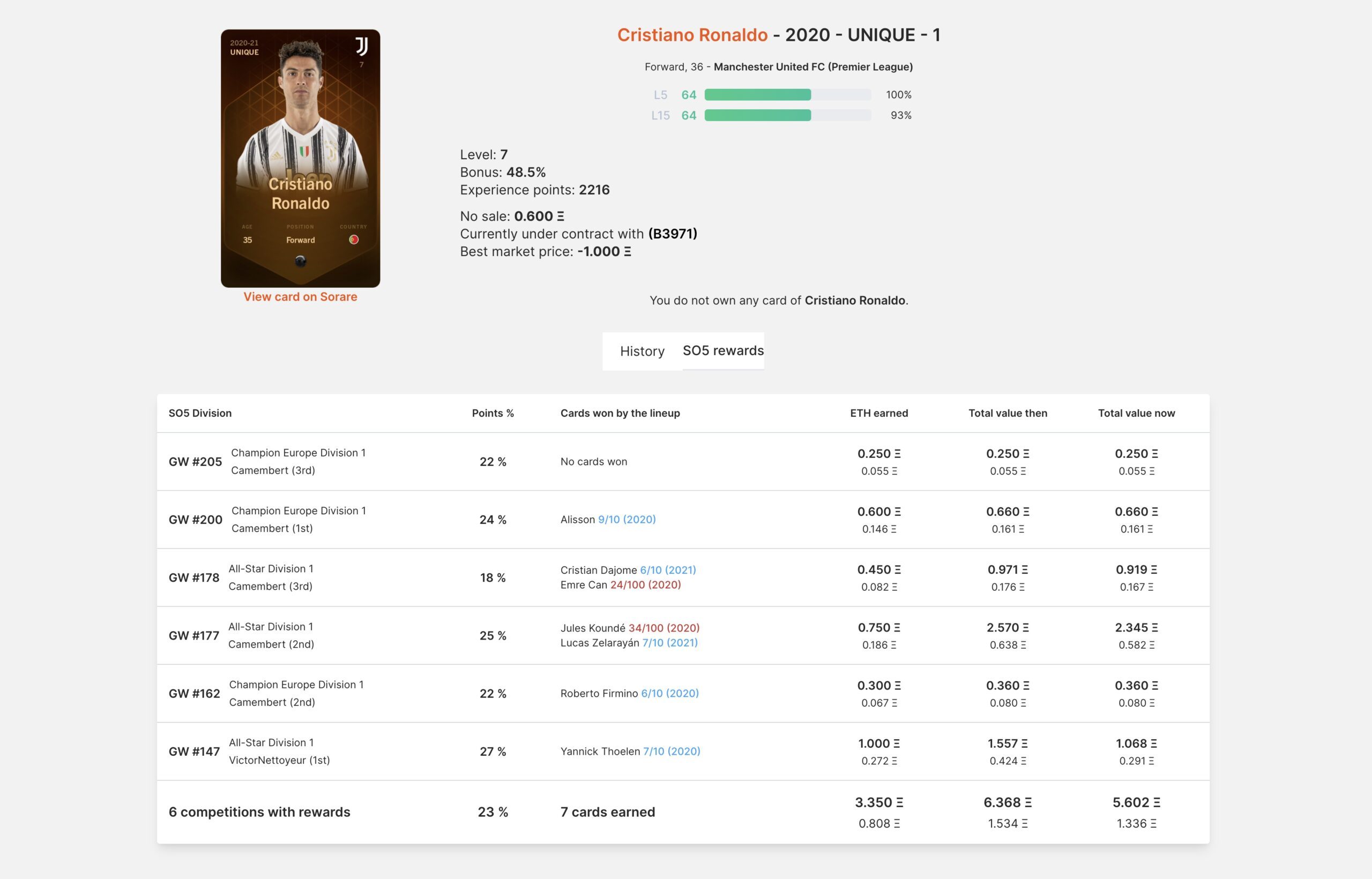 From the New World to the Old World

At the start of the school year, the owner of the card changed his mind and decided to put his card back on sale. Unlike the first resale, it was not via Sorare that the auction took place, but at Bonhams, a traditional and highly recognized auction house. Strength of (real) NFTs, they are not platform dependent, and Camembert was able to transfer his Sorare card to the auction house.

The rest we mentioned in the title, Cristiano Ronaldo’s NFT was sold for $ 400,312 by Bonhams. It became the second most expensive soccer card in history, after a physical card signed by Erling Haaland, which sold for $ 432,000 last June.

For Camembert, the deal is not as good as it looks. If we analyze things with the price in dollars, the capital gain is excellent, with $ 123,000 won thanks to this transaction in a few months. If we take the price of ETH, it is much more contrasted, the 150 ETH invested at the time are worth at the time of this writing a little more than $ 700,000.

In any case, this is excellent news for Sorare, who continues his hyper growth and continues to sign partnerships after his record fundraising of $ 680 million. If you want to know more about the concept, check out our full Sorare review.

Check out the best real estate funds to circumvent election volatility, according to Genial

TSE orders to remove posts that link Lula to Satanism

Check out the best real estate funds to circumvent election volatility, according to Genial

overview of the results of the evening

ITUB4, VALE3 and 8 other stocks to invest in October, according to PagBank

what to remember on the 224th day of the russian invasion

those motorists queuing to buy fuel

to avoid peaks, the heating of the water can be shifted

All about the energy sobriety plan that the government will unveil

To “lower the cost of energy”, the State guarantees the contacts of the companies

Political message expected: Nobel Prize in Literature 2022 will be announced

The Woman King in cinemas: Wakanda for Real

“The Farmer and Bobo” in the cinema: misunderstandings of our time

overview of the results of the evening

The SNCF opens the sale of tickets for Christmas: how to optimize your purchase?

This giant battery is capable of powering an entire city, a record

The 4 qualities you need to have to work at Apple